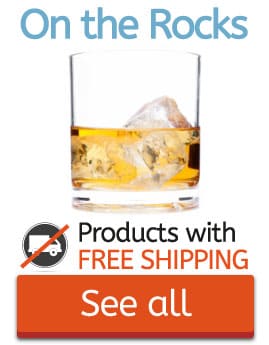 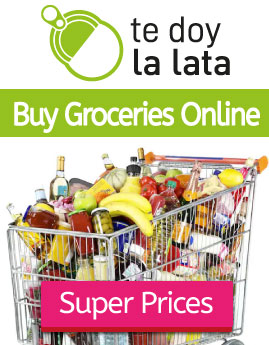 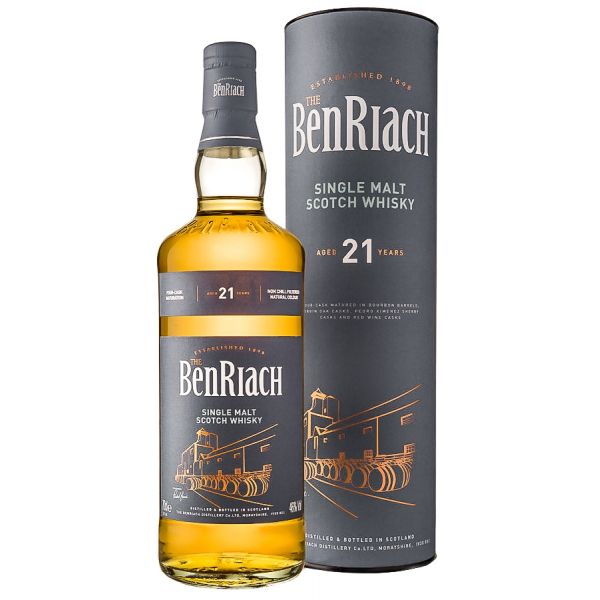 Get it adding to the cart an "On The Rocks" product 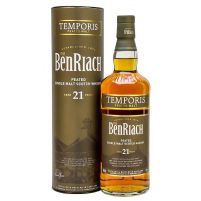 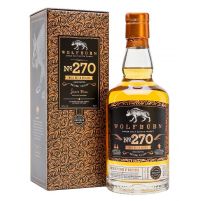 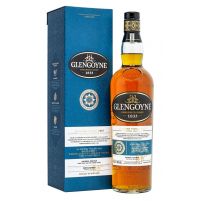 BenRiach 21 year old is a seductive single malt Scotch whisky from the Speyside region that has been matured for at least 21 years.

After this, the whisky from the four types of barrels is expertly blended by our Whisky Maker, to create a superbly balanced multi-faceted malt.

The liquor contained in each type of barrel adds different notes to the flavor of this whisky, vanilla, chocolate and red fruits are some of them, all developed from the sweet barley and the loaded style of the BenRiach fruit.

This whisky has a bright autumn gold color.

In nose we can say that it reminds us of ripe fruit compote with a light candied peel and a ginger stem background.

The flavor of BenRiach 21 years is expressed by vanilla and cinnamon, which gives way to red fruits somewhat spicy and citrus peels.

In addition, it has a long, sweet and satisfying finish with the formation made by the barley sugars and sharp malt.

Pairing. How to taste it

This is an ideal whisky to be enjoyed alone in a tulip-type whisky glass.

A little bit of history about Benriach Single Malt 21 Years...

At BenRiach Distillery we are well known for doing things differently in the footsteps of founder John Duff, who placed the distillery in the heart of malt whisky in northern Scotland, where it shows all the traditional charm of a Speyside distillery since 1958.

It is one of the few distilleries that has its own malting in the same place where the whiskey will be made, also draws water for this development of the spring of Burnside.

The name of BenRiach is given in two parts: on the one hand, Ben, whose meaning in English means "peak", a more common use in areas of Scotland and Ireland, on the other hand, Riach, which is the name of the farm that was in the place where John Duff founded the distillery.

BenRiach is a hidden jewel of Speyside that is distilled in three different styles: classic non-smoked, Highland smoked and triple distilled, with which layers of different flavors are produced.

In the year 1900 the company closes due to the "Patison Crash", this, together with the First World War, the Dry Law and the Second World War, made that BenRiach did not return to produce whisky until the year 1965.

In 2004 the brand was acquired by the independent consortium led by Billy Walker, these new owners were able to launch a portfolio of both smoked and unsmoked whiskies by August of the same year.

This idyll would last until 2016, when the company was bought by Brown Forman, a US-based spirits company with a 150-year history.

Benriach Single Malt 21 Years is a fantastic Single Malt Whisky of Premium class with an alcoholic volume of 46% from Scotland, without doubts, one of the gratest reference from the category Whisky.

You can buy Benriach Single Malt 21 Years in these sizes:

Be the first to write your review !

No customer comments for the moment.

Similar products (4)
Other types of Whisky (9)